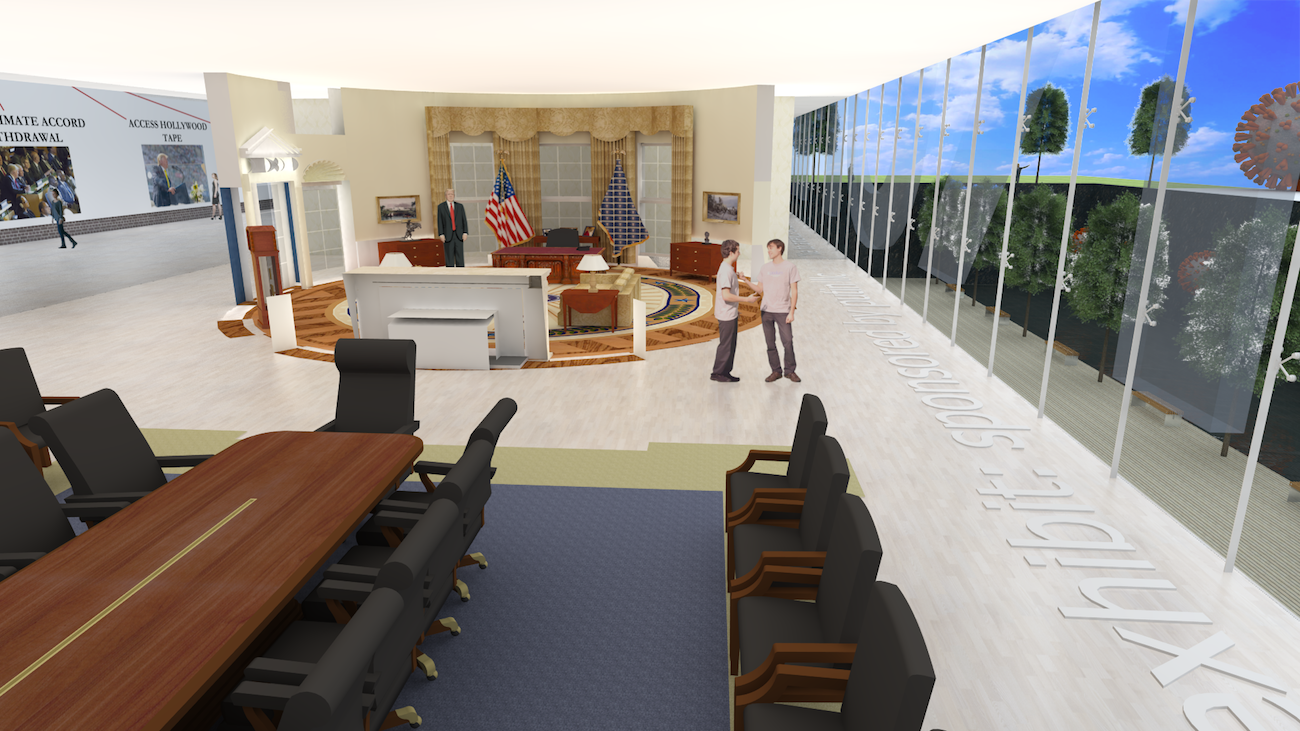 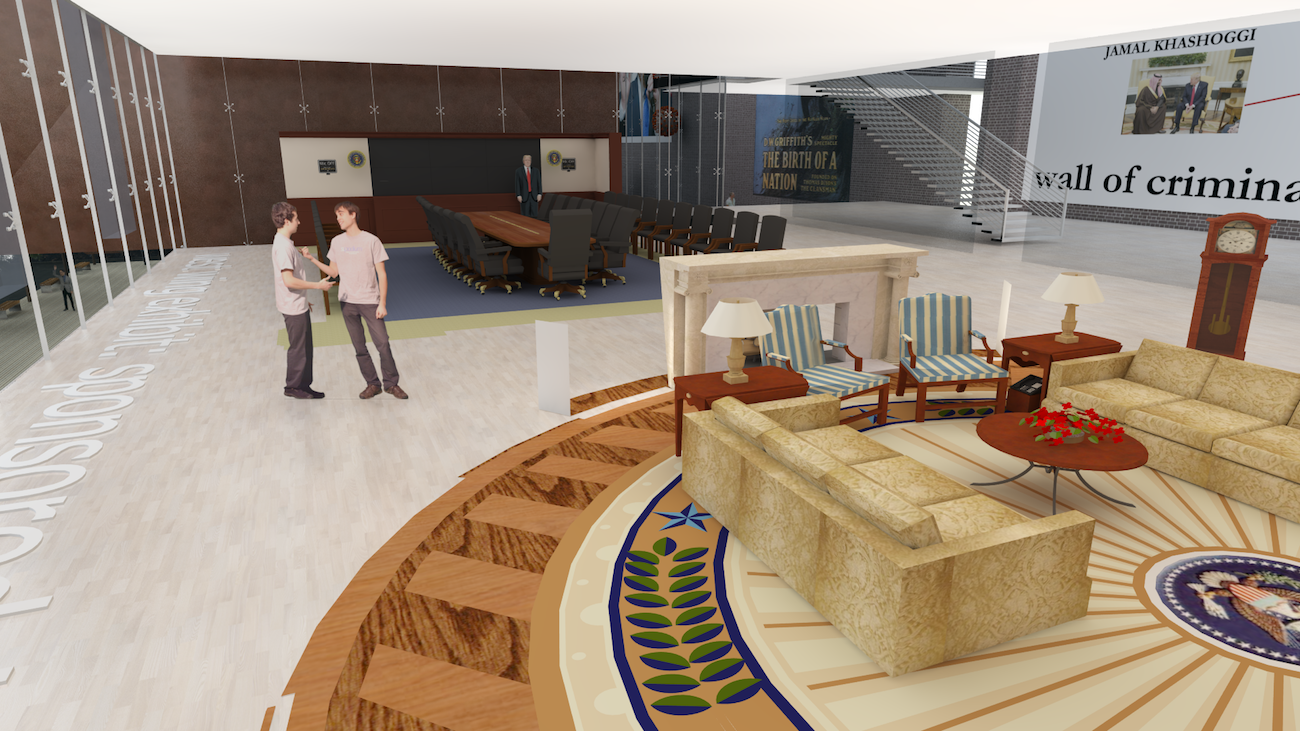 This part of the tour is simple. It’s an office. It’s oval. And it has some furniture. But take a minute anyway. This is one of the most important rooms in the world.

Welcome to the Oval Office. A place where America’s Presidents have made history, brokered deals, planned wars, oversaw the country, and occasionally had some fun (thanks Bill and Jack).   But never before has a president done what he could to change the course of American history and American exceptionalism like the 45th President of the United States. Under his historic leadership, President Trump redefined American Exceptionalism to the point that all our allies looked upon us in a new light and thought, “We’re in it together, except America, of course.”

As you stand within this space, envision all the great men who have steered our country through perilous and trying times. From Washington who oversaw the birth of a new nation, to Lincoln who kept the country together and abolished slavery, to FDR who got us through an economic depression and most of World War II, to Ronald Reagan who got Russia to tear down that damn wall.

As you absorb the power of this space, share the wonderment of the rest of civilization as from this office, President Trump has done things no other American President has ever dreamed of doing. After all, it takes balls to sit in the once hallowed ground that was the Oval Office and disclose American secrets to the Russian Foreign Minister. But what are a few secrets from your best bud Vlad.

Even from behind the legendary Resolute Desk, Donald Trump set new bars for all future presidents. You can rest assured, no matter how low they go, no one in all eternity will ever be able to sink this once great office any lower. I can also venture to guess that no other future President will hawk products from behind this desk, especially while a pandemic was killing hundreds of thousands of his subjects.

On a personal note, we here at the Trump Library had hoped to get some family photos to finally put on the Resolute Desk. However we were contacted by Melania’s attorneys and they reminded us that the new prenup did not allow any displays of her and Donald together until he completed his work release program. It turns out he does not look good in stripes. I hear he hates them because they make his ass look even larger.

Like most presidents, the power of the Oval Office inspired President Trump. Like most presidents, the Oval Office led President Trump to dream of the future. Unlike most presidents, Trump’s dreams were more like odd dementia-driven nightmares. But with the help of Bill Barr, Mitch McConnell and the Republican Supreme Court, he succeeded in making his dreams reality. From abandoning NATO, to abandoning the Kurds, to abandoning Americans suffering in the pandemic, no battle has been unworthy of his white flag. From the kidnapping of babies from their mothers, to denying refugees shelter, to throwing the lives of his supporters to the wind in pandemic spreading rallies, no rule of law or decency ever stood in his way.

Finally, please note the presidential phone. Yes, this is the phone that President Donald J. Trump made that famous “perfect” phone call with Ukraine President Zelensky. Personally, none of his aides were surprised. Let’s admit it; the Commander-in-Chief has a weakness for a little something strange on the side. But I will not go into any yellow journalism concerning the President. But with that great and “perfect” call, Trump seemed to seal his fate in an impeachment for a little quid pro quo. But we as a country were saved from that fate by the great Republican Senate. I mean, where would we have been without their leadership in the pandemic?

Here is a little known secret, just so we are clear. Please keep quiet while you talk among yourselves. We do have the tapes. The Presidential Tape System is still whirling. As with any good surveillance state, America captures all the data, especially the President’s. It’s just the CIA withholds that info from those who sit behind that desk. What fun would it be if they knew? But President Trump had nothing to worry about. All his secrets were safely stored in the mountains of West Virginia, underneath tons of rock and guarded by the lowest government bidder. I hear it was one of Cuomo’s cousins. So, yes, no worries. Vance already had his confession and taxes.

Official Library Note: As to his tweets, we have a disclaimer. We at the Donald J. Trump Library have not been able to verify that President Trump ever actually tweeted from the Oval Office. We are almost certain that occurred mainly when he was doing his other number twos.

Trump Kidnaps Babies – Even the Young Ones

Trump Dumps the World Health Organization in Midst of Pandemic

Lindsey Graham “Back to the good old days of segregation”

Trump making out with a flag